All the Features of Morganite and the Rings for You

Morganite works against heart palpitations and other problems related to this important organ, as well as help cleanse the lungs, treat the nervous system and alleviate stress-related diseases. It is used in the treatment of asthma, pulmonary emphysema and tuberculosis, and assists in the oxygenation and regeneration of cells damaged at the cellular level.

It opens the heart chakra and helps to overcome fear, resentment and anger and to recognize unmet emotional needs and unexpressed feelings. It stabilizes emotions and activates loving thoughts, actions and brings wisdom and peace of mind. It increases the ability to give and receive love, releases clinging to old relationships, and supports the way forward and emotional openness. In short, morganite is a stone of love and compassion. It helps the flow of positive energy in the body, maintains a youthful appearance and removes laziness. It increases a person’s sympathy and sincerity. It is a very romantic gemstone, so it is often given as a gift expressing deep feelings and sincere love. Before you want to make use of the Morganite Rings here are some important aspects of the rings and more.

Morganite in subtle shades of pink focuses primarily on relationships. Bulls lead to mutual understanding and a sense of cohesion with their surroundings. The sign of Libra helps in love and clears up misunderstandings. For thoughtful Aquarius, it supports their thoughtfulness and communicativeness.

The Most Famous Morganite

The largest cut morganite in the world, weighing 598 ct, has the shape of a cushion and comes from Madagascar. It is currently on display at the British Museum.

One of the largest crystals of morganite was discovered in October, in 1989 in Maine. The orange stone measured 23 x 30 cm. The beautifully shaped gemstone weighed over 40 kg or 11,500 ct. It is currently part of the Harvard collection.

The hexagonal crystal, originally from San Diego, California, is a rarity mainly due to its deep pink color. The slightly damaged surface retains its shine and, despite the inclusions, reflects light beautifully and interestingly. It weighs 361 grams.

One of the interesting properties of morganite is its deep red fluorescence when exposed to X-rays. However, when the radiation source is turned off, it has zero phosphorescence.

In addition to the classic pink variants, there are also orange or yellow variants of morganite, as well as those with colored stripes.

Untreated morganite often contains deep orange elements that cause it to become salmon-colored.

Morganite is found in large crystals weighing up to tens of kilograms.

Morganite excels in a soft pastel shade and is relatively rare, due to the minimum number of places where it is mined. Occasionally, it can be confused at first glance with the following stones:

Morganite was accepted as a professional stone of lawyers to ensure justice. Morganite is a great stone for starting a new business, which is said to gain market support. In addition, it is considered an ideal talisman for meeting bank managers and accountants, as it guarantees fair dealing. The combination of morganite with other varieties of beryl (emerald, aquamarine) strengthens deep love. 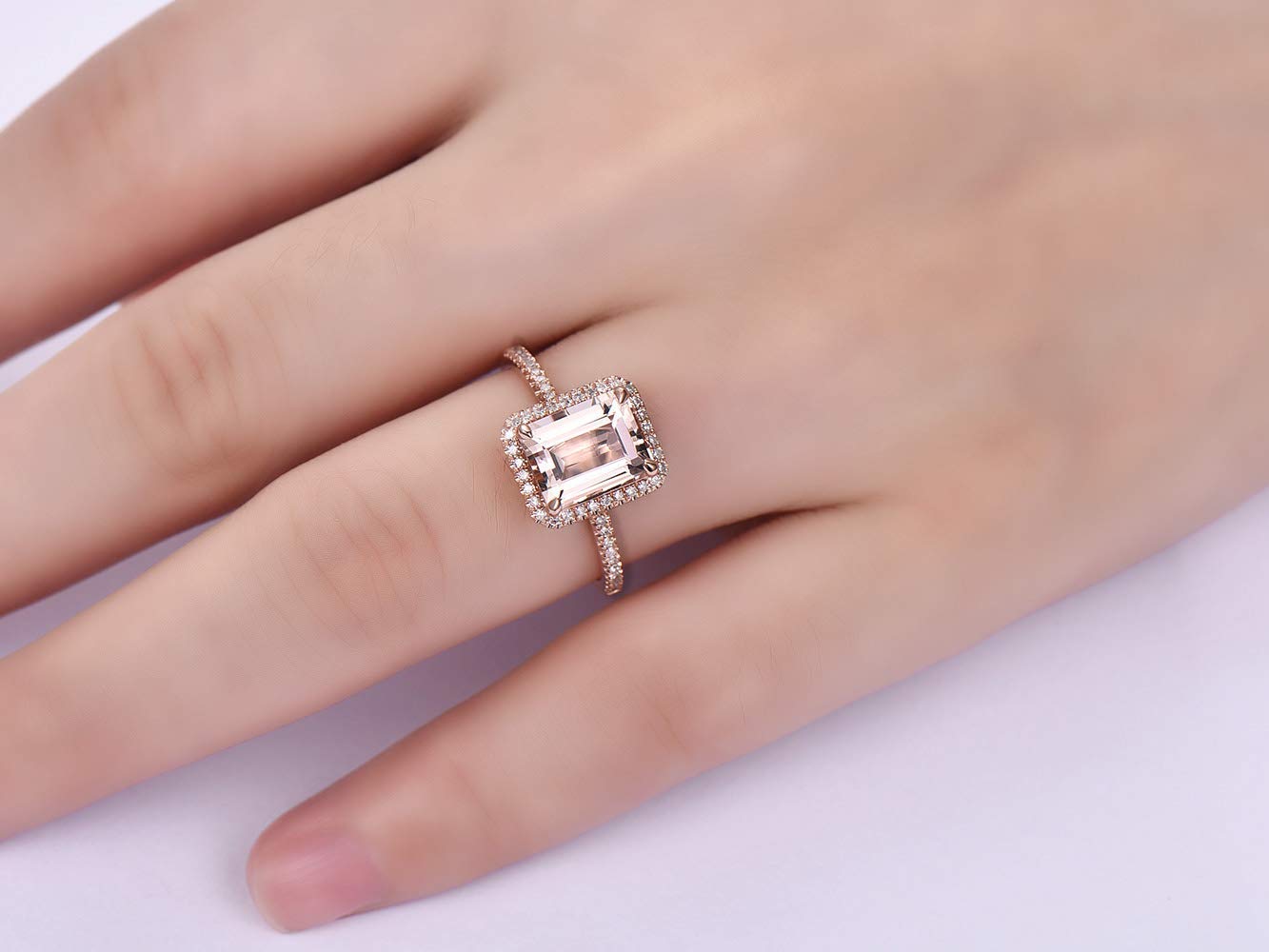 Morganite is the pink form of beryl, which emerald is the green version and aquamarine the blue. Beryl consists of beryllium aluminum silicate, which also contains other trace minerals, allowing the determination of crystal color variants. The presence of manganese gives the pink color of Morganite. Morganite ranges in color from light pink to salmon. It has a hardness rating of 7.5 to 8 on the Mohs scale of hardness, making it an exceptional stone for use in jewelry.

Discovered in the early 1900s in California, Morganite got its name from George Kunz, a gem buyer for Tiffany and Company. Kunz named it after JP Morgan, the great bank tycoon who was a famous gem collector in his own right.

Although discovered in California, Morganite can also be found in Brazil, Madagascar, Afghanistan, Russia and Africa. Still, it is a relatively rare gem. The largest Morganite found was close to 600 carats and is now in the British Museum’s collection.

Like other pink stones that rose quartz, Morganite brings unconditional love, but on a much gentler wave. It is believed to improve communication, especially with angels and other spiritual guides. Place it on the heart chakra to cleanse and detoxify.

Pink gemstones recently began to be mastered by domestic jewelers. And in America, he has great popularity with a ring with this stone is considered engagement, bringing joy and love to a couple. Buddhist monks call the pink stone a talisman that provides enlightenment. It’s about morganite, but the mineral has a few other names.

Morganite is a mineral pink-violet palette from pink to purple, sometimes brownish. Yellow and peach colors are considered valid in it. By the way, peach sparrow is a real rarity. In terms of its value, it even surpasses a diamond.

Belongs to the group of minerals beryl, and therefore has characteristics that are characteristic of them. The palette of the mineral is explained by the presence of manganese, lithium, iron and cesium in the composition of the impurities. Density values ​​range from 2.6 to 2.9 g or cu. cm, Mohs hardness is 7.5-8 units.

However, sparrowing has characteristics that are not characteristic of other beryls. It differs in the shape of the prism by being acceptable for different degrees of transparency in different faces. The form of morganite is comparable to the imperial topaz, but it differs from the latter in that it is valuable. However, there is a synthetic analog morganite, which is no more than a nano-crystal grown by artificial means.

Despite high hardness, sparrows are fragile. All jewelry with this stone has a natural shade. The stone does not undergo a change in pigmentation. This, by the way, is partly due to the fragility of the mineral.

Morganite has a rich color palette, beginning with a pink manganese consideration and reaching a deep red and purple. In this case the stone contains large amounts of cesium. In addition, the composition contains quartz.

If a ray of light is directed at it, then the stone will either be completely transparent or slightly cloudy. The mineral has a bumpy and shell-like fracture. Before the jewelry treatment, the mineral looks very imprecise. It has noticeable scuffs and roughness. The form is a polyhedron consisting of long prisms with parallel edges. With a large number of prisms, the stone may appear brown.

In the structure of morganite there may be inclusions bubbles of gases, liquids. Such a mineral will be opaque and have a lower price than the transparent counterpart. Moreover, a sparrow without such interventions is easier to cut, for which jewelers value more.